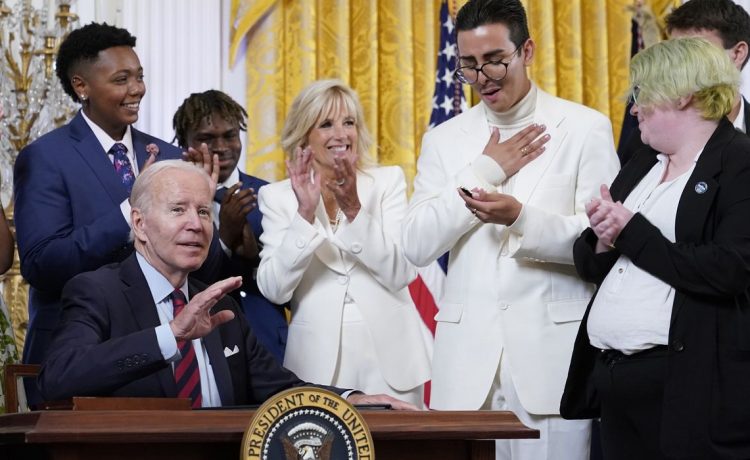 President Biden took executive action Wednesday to counter states fighting the gender-identity movement in medicine and education, marking Pride Month by vowing to push back on “the ultra-MAGA agenda.”

The executive order directed the Health and Human Services and Education departments to address state laws that “target transgender children and their parents by banning access to medical care and support at school.”

“I don’t have to tell you about the ultra-MAGA agenda attacking families and our freedoms,” said Mr. Biden at the White House signing ceremony. “Three hundred discriminatory bills introduced in the states across this country.”

State bills under fire by LGBTQ advocates include those that prohibit minors from undergoing gender-transition procedures; ban schools from teaching about sexual orientation and gender identity in grades K-3; and bar male-born athletes from female scholastic sports.

“We know that in places across the country, like Florida, Texas or Alabama, rights are under attack,” first lady Jill Biden said at the event.

Florida Gov. Ron DeSantis signed in March with a bill to ban K-3 classroom instruction on gender and sexuality, while at least four states have passed measures banning hormones, puberty blockers or sex-change surgeries for those under 18.

Since 2020, 18 states have approved laws to prevent male-born athletes from competing in female sports. Earlier this month, Louisiana Gov. John Bel Edwards, a Democrat, allowed such a bill to become law without his signature.

Recently released polls show that most Americans support such measures, said Terry Schilling, president of the conservative American Principles Project, who accused the president of “advancing the transgender agenda.”

“Never mind that all these efforts have the overwhelming support of voters; the woke Left cannot abide such democratic lawmaking,” Mr. Schilling said. “Instead, the Biden administration will try to undermine these popular laws however possible.”

Charles Moran, president of the Log Cabin Republicans, accused Mr. Biden of using his podium “to mislead on and demonize the common sense parental rights law in Florida and other similar bills across the country that protect young children from woke lesson plans.”

“President Biden always stands up to bullies,” said the official. “And that’s what these extreme MAGA laws and policies do – they bully kids. Hateful, discriminatory laws that target children are out of line with where the American people are.”

Mr. Biden reiterated his support for the Equality Act, which would extend federal anti-discrimination protections based on sexual orientation and gender identity, a move that critics say would open the floodgates to biological males in women’s prisons and sports.

Mr. Biden’s order lacks the authority to overturn state laws, but it came as a signal that the administration plans to play hardball with red states on gender-identity issues.

The order charges HHS with “protecting LGBTQI+ children and families from attacks on their access to health care,” and “to release new sample policies for states on how to expand access to comprehensive health care for LGBTQI+ patients,” the White House said in a fact sheet.

“The President is also directing the Department of Education with addressing the impacts of state laws that target LGBTQI+ students, and has charged the department with releasing a sample school policy for achieving full inclusion for LGBTQI+ students,” the administration said.

Mr. DeSantis feuded with the Walt Disney Company after signing the so-called “don’t say gay” bill, but an April poll found that 61% of registered U.S. voters supported the measure’s wording.

Mr. Biden rolled his eyes at such bills.

“In Texas, knocking on front doors to harass and investigate parents who are raising transgender children,” Mr. Biden said. “In Florida, going after Mickey Mouse for God’s sake.”