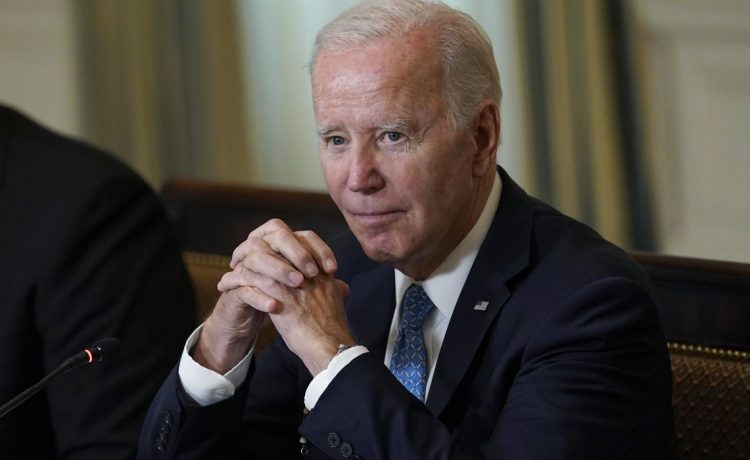 White House press handlers pushed reporters out of the State Dining room on Monday as journalists shouted questions at an unresponsive President Biden at a meeting with advisers on economic competition.

Mr. Biden ignored questions ranging from the war in Ukraine to the economy as his press team began shooing reporters from the room. Some reporters were pushed, according to a pool report by a Washington Post reporter in the room, as the White House handlers attempted to remove them.

Shortly before reporters were shown the door, trading on Wall Street concluded another dismal day. The Dow Jones Industrial Average fell more than 300 points on Monday, moving into bear market territory, more than 20% below its record high.

Republicans say the president and his administration are failing to address skyrocketing inflation and soaring gas prices.

“Biden and Democrats turned a recovery into a recession, created 40-year high inflation, and sent gas prices skyrocketing because of his war on American energy,” Republican National Committee Chairwoman Ronna McDaniel said Monday. “Costs are soaring, Americans are falling behind, and Joe Biden and the Democrats don’t seem to care.”

The jostling at the White House capped an otherwise typical press availability preceding Mr. Biden’s meeting with the White House Competition Council, a group of administration officials brought together to increase competition in the U.S. economy.

During his remarks, Mr. Biden acknowledged the current state of global economic uncertainty, before touting his administration’s strategy to lower costs for Americans.

“We meet at a moment, to state the obvious of global uncertainty,” Mr. Biden said. “Countries around the world are grappling with elevated inflation. The ongoing war in Ukraine is presenting challenges as well.”

“But amidst all of that here is what I want people to know: Because of the American people’s resilience and because of the economic strategy we’ve pursued, the United States of America is in a stronger position than any other country to navigate these global challenges,” he said.

The president said the primary focus of the officials gathered was to lower costs for middle-class families, taking aim at oil companies that he said were continuing to make “record profits” as average Americans break the bank at the pump, reigniting his feud with oil execs over the summer as gas prices spiked.

“My message is simple…Bring down the prices you’re charging at the pump,” he said. “Do it now…Not a month from now, do it now.”

Gas prices have fallen about 25% since hitting a record-high average of $5.01 per gallon in June.

The president also cited various fees that banks, airlines and cell phone companies charge that he said are driving up costs for Americans as inflation continues to climb.

Mr. Biden unveiled an initiative ahead of the meeting that he said would force airlines to be more transparent with consumers about the “true costs” they pay for airline tickets — including baggage and change fees — before booking.

The White House said the proposed rule by the Transportation Department will promote competition among airlines and eventually bring down costs for consumers.

Mr. Biden has suffered in the polls amid persistent inflation under his administration and Democrats are facing an uphill battle with voters in the upcoming midterms as worry over the economy grows.