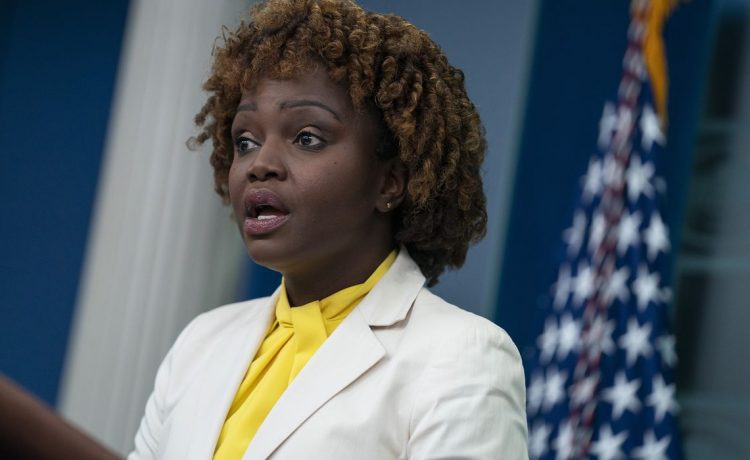 The White House on Friday attempted to take the edge off of President Biden’s warnings that the U.S. could soon face nuclear “Armageddon.”

White House press secretary Karine Jean-Pierre attempted to allay heightened fears when speaking with reporters aboard Air Force One, returning to the administration’s official mantra that the U.S. has no indication “that Russia is preparing to imminently use nuclear weapons.”

“[Mr. Biden] was reinforcing what he has been saying, which is how seriously we have taken these threats about nuclear weapons as we have done when the Russians have made these threats throughout the conflict,” she said. “The kind of rhetoric we have seen is no way for the leader of a nuclear-armed state to speak, and that’s what the President was making very clear.”

Still, Ms. Jean-Pierre reiterated that the U.S. does not assess that Mr. Putin intends to launch nukes in the immediate future.

“As I said before, we have not seen any reason to adjust our own strategic nuclear posture,” she said.

Mr. Biden delivered the chilling assessment of impending nuclear doom while speaking at a private Democratic fundraising event Thursday evening. He seemed to reverse from previous attempts by the administration to calm fears amid Russia’s saber-rattling. He told the small group of donors that for the first time in decades, the U.S. faces “the direct threat of the use of a nuclear weapon if, in fact, things continue down the path they are going.”

He said  Russian President Vladimir Putin’s nuclear rhetoric in Ukraine was the biggest since the 1962 Cuban Missile Crisis.

After sustaining heavy territorial and personnel losses in Ukraine, Mr. Putin has responded with a significant escalation in his nuclear saber-rattling, though it has been a persistent rhetorical theme by Russian officials since they invaded in February.

Mr. Putin warned in a rare televised event last month announcing the mobilization of hundreds of thousands of military reservists that Russia will use all tools at its disposal in response adding that his threats are not a “bluff.”

U.S. officials have expressed concern over the Kremlin’s nuclear threats throughout the war in Ukraine, but have said that they have not detected any of the kinds of changes in Russia’s nuclear forces that would alter the U.S. alert posture.

Pentagon spokesperson Brig. Gen. Pat Ryder told reporters on Thursday that the U.S. “doesn’t assess that President Putin has made a decision to use nuclear weapons at this time.”

“Many people in our government and in the international community, including Secretary Austin, have highlighted the fact that this nuclear saber-rattling is reckless and irresponsible,” he said. “We’re taking it very seriously,” he added. “We’ll continue to monitor. But in the meantime, again, our focus is on supporting Ukraine.”

Hours later, however, Mr. Biden seemed to up the ante telling the private audience that Mr. Putin is “not joking” in his threat to use nuclear weapons and warned of dire consequences if the Kremlin continues along its destructive path.

“We have not faced the prospect of Armageddon since Kennedy and the Cuban Missile Crisis,” he told the attendees at the private event.

Mr. Biden said the U.S. is working to determine what Mr. Putin’s “off-ramp” in Ukraine might be.

“We’ve got a guy I know fairly well,” he said of Mr. Putin. “He’s not joking when he talks about potential use of tactical nuclear weapons or biological or chemical weapons, because his military is, you might say, significantly underperforming.”

Western governments have been especially concerned about Mr. Putin’s inclination to conduct a low-yield tactical nuclear strike in Ukraine to send a warning to the West and rattle the Ukrainians who have continued to defy the Russian assault and talked about taking back territory that Russia seized in 2014.

Mr. Biden said the consequences of any nuclear strike carried out by Russia would be disastrous.

“Russia’s talk of using nuclear weapons is irresponsible and there’s no way to use to use them without unintended consequences,” Ms. Jean-Pierre said Friday. “It cannot happen. We want we won’t be intimidated by Putin’s rhetoric.”