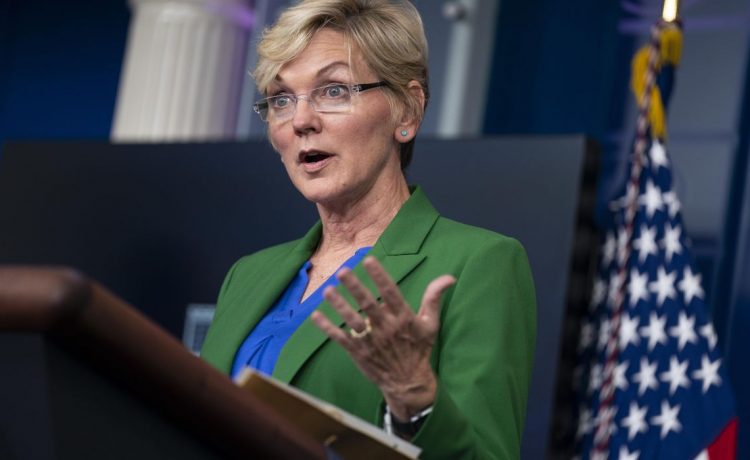 The Biden administration struggled Sunday over its messaging on President Biden’s trip next month to a conference in Saudi Arabia, the oil-producing kingdom that Mr. Biden once vowed to make a “pariah.”

Energy Secretary Jennifer Granholm walked back President Biden’s claim that he would not meet directly in Riyadh with Crown Prince Mohammed bin Salman, who approved the 2018 operation to capture or kill journalist Jamal Khashoggi, according to a U.S. intelligence report.

“I know that he will —- I think he will meet with the Saudi crown prince,” Ms. Granholm said on CNN’s “State of the Union.”

Asked if Mr. Biden would meet one-on-one with Prince bin Salman, Ms. Granholm replied, “That’s my understanding that they — he will be meeting.”

Mr. Biden told reporters Friday that he would attend the GCC+3 summit, but that he was not going to meet with Prince bin Salman, known as MBS.

“I’m not going to meet with MBS. I’m going to an international meeting, and he’s going to be part of it,” the president said.

President Biden on how he will handle Khashoggi killing during Saudi Arabia trip: “The same way I’ve been handling it. I’m not going to meet with MBS. I’m going to an international meeting and he’s going to be part of it…” pic.twitter.com/mD2cKtRAM2

Mr. Biden took a hard line on Saudi Arabian leaders on the 2020 presidential campaign trail, saying in 2019 that he would ensure they “pay the price, and make them, in fact, the pariah that they are” over the assassination of Khashoggi, a prominent critic of the Saudi government.

CNN host Dana Bash didn’t let Ms. Granholm off the hook, asking if she could explain “why it is appropriate for a U.S. president to meet with a dictator who murdered and chopped up a journalist, to do that when it comes to human rights, given what he has said before about it?”

She later clarified that Prince bin Salman “didn’t actually do the murder. He ordered it.”

“But he’s also very concerned about what people are experiencing at the pump,” she said. “And Saudi Arabia is head of OPEC. And we need to have increased production, so that everyday citizens in America will not be feeling this pain that they’re feeling right now.”

“Is he going to meet with the Saudi crown prince?”@DanaBashCNN presses @SecGranholm on President Biden’s upcoming trip to Saudi Arabia. @CNNSotu #CNNSOTU pic.twitter.com/ODaEftoIjN

U.S. average gas prices have set a series of record highs for weeks, topping out on June 14 when the cost hit $5.016 per gallon. The cost on Sunday was $4.98 per gallon, according to the AAA tracker.

Mr. Biden has come under criticism for reaching out to rogue nations like Iran and Venezuela to increase production as he struggles to contain the rising fuel prices that have sent his approval rating into a free-fall.

“I’m glad the president recognizes we need more energy in the marketplace. Check that off, I said something good about President Biden this morning. But the first place he should go is Midland, Texas, or the Bakken shale, or Pennsylvania,” former Secretary of State Mike Pompeo said on Fox News’ “Sunday Morning Futures.”

“American energy is the right place to start,” Mr. Pompeo said. “Instead, they started with the Iranians and the Venezuelans, and they’ve now moved to the Saudis.”