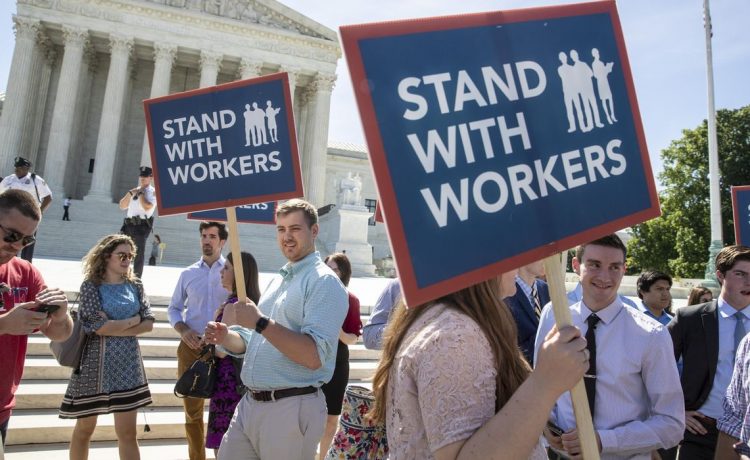 A surgical tech at a Veterans Affairs clinic in Arkansas was fired in 2017 after she admitted to sexually charged behavior with colleagues, including peeping at them over bathroom stall walls or groping their buttocks.

Her labor union appealed the decision to arbitration, and the arbitrator in 2018 cut her punishment down to a 30-day suspension and put her back on the job — with a year’s worth of back wages to boot, according to a report by the conservative America First Policy Institute.

The tech is not alone.

AFPI reviewed hundreds of cases and concluded that in a majority of cases where a federal agency fires an employee and their union files a grievance demanding arbitration on the decision, the arbiter ends up overturning the ouster and reinstating the worker.

It’s one of the reasons why it’s so hard to fire a federal worker who belongs to a union, said James Sherk, the AFPI researcher who pored over 435 cases to draw his conclusions.

“In some cases, arbitrators appear to bend over backward to reinstate employees,” he concluded in the report.

He said there’s a clear reason for that. The unions help select arbitrators.

When a case goes to arbitration the arbitrator is selected from a list that is shaped by both the agencies and the unions. Mr. Sherk said the unions put a lot of effort into tracking who is lenient toward them and who isn’t, and they use that to strike adversarial arbitrators.

He said that federal agencies could do the same thing in tracking cases, but they don’t.

That not only creates a pool of arbitrators that skews toward the unions, but it is a financial incentive to arbitrators to keep up their union-backing numbers. Otherwise, they may find themselves struck from the list for future work, Mr. Sherk said.

“There’s plenty of cases where the employee should have been gone from the agency yesterday, and the union goes to bat for them and gets their job back,” he told The Washington Times in an interview. “I think every federal employee should serve at the president’s pleasure … but if you are going to have civil service protections, it should be through a regulated process where the adjudicators do not have a financial incentive to rule in favor of the employees.”

The study found arbitrators overturned removals in 58% of cases.

That’s more than twice the reinstatements by the Merit Systems Protection Board, which also can hear a federal employee’s challenge to having been fired. The board reinstated workers at a 28% rate during the period under study.

The MSPB is open to all federal employees while arbitration is only open to union members, through the collective bargaining agreements they’ve struck with their agencies. Indeed, it is the union that must file the grievance that triggers arbitration for an employee’s case.

Unions represented 56% of the federal government’s 2.16 million employees as of March.

Andrew Huddleston, a spokesman for the American Federation of Government Employees, with about 280,000 federal and D.C. government employees, said agencies lose cases because they are making bad arguments.

“When a team is on a losing streak, it’s common to blame the referees. But the real reason why federal managers don’t win these arbitrations more often is because they have failed to document to the satisfaction of an independent, third party that their actions were justified,” he said. “If they would do a better job, they’d win more often.”

He challenged Mr. Sherk’s methodology in comparing MSPB cases and arbitrations, saying unions are careful about which cases they take to arbitration, so it’s no surprise employees’ winning percentage is higher.

Tony Reardon, national president of the National Treasury Employees Union which represents about 150,000 federal employees, also stressed the ability of unions to evaluate which cases have merit as a factor in why arbitration is successful more than half of the time.

Not only do unions pick which cases to pursue on behalf of employees, but they also provide legal representation. By comparison, Mr. Reardon said, any employee — union or not — can go to the MSPB, and many do so without representation.

“Therefore, it is no surprise that employees may win in arbitration more often than at the MSPB,” he said in a statement to The Times.

Mr. Reardon said his union has pressed Congress to improve training for federal managers because they are “often ill-equipped” to document employee problems and bungle the firing procedures, which fuels bad cases that get overturned.

Mr. Sherk said it’s not just unions that shape the cases that end up in appeals. Agencies also make decisions, and given the hurdles to firing someone — and keeping them fired — an agency is usually only going to jump through the hoops for a really bad employee.

He said he worked with the data that was available through his Freedom of Information Act request and the difference between MSPB and arbitration outcomes stood out.

Mr. Sherk said Congress could step in and end grievance arbitration, which would still leave employees with the MSPB route for appealing a firing.

He also said the grievance process rests on shaky legal ground and a future administration willing to battle the unions could challenge it in the courts.