Wife recalls trying to save officer killed in mass shooting 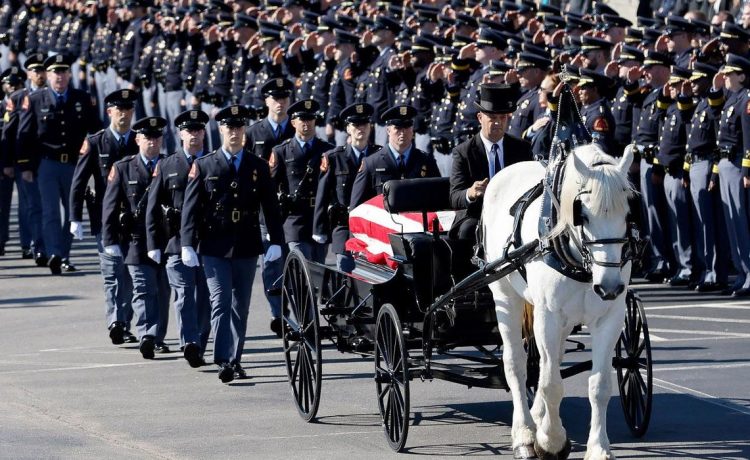 RALEIGH, N.C. (AP) — The wife of an off-duty police officer killed during a North Carolina mass shooting recalled Saturday how she tried to save him after he was shot.

“I’m glad you were still with me long enough so that I could kiss your skin while it was still warm,” Jasmin Torres said at the memorial service for Gabriel Torres, 29. “While I could still feel the pulse of your heart.”

Torres, a Raleigh police officer and former U.S. Marine, was inside his personal vehicle and about to leave for work when authorities said he was shot by a 15-year-old boy wearing camouflage clothing and firing a shotgun.

Police said the teenager killed five people, including his older brother, during the Oct. 13 rampage in the Hedingham neighborhood and along a nearby walking trail. While authorities continue to search for a motive, North Carolina’s capital city was still reeling days later – and paying tribute to those who had died.

“Finding you wounded with your life slipping away is a pain too hard to deal with,” she said.

She added: “I gave my all to try and save you. I’m sorry if I scared you. I didn’t know I could scream that loud.”

Jasmin Torres recalled the times she and her husband had spent apart from each other over the years, including during his deployments as a Marine and then working nights as a police officer.

“I am so, so, so, proud of you,” his wife said. “You were so dedicated to your work. I had to beg you to use your time off. Your night shifts were hard – it created distance – but we got through it.”

Raleigh Police Chief Estella Patterson said Torres often checked in on the fellow officers he had trained with at the police academy.

“Always making sure that they and their families were okay,” the chief said. “I’m told he always had an extra something on hand, whether it was a pair of socks, a T-shirt, an extra flashlight or an extra few dollars to share if someone was in need.”

The highlight of Torres’s day, Patterson said, was cooking dinner for Jasmin and their daughter Layla before work.

“He has left an example to each of us of what the world needs more of – not those running away from the challenges of the profession and the inherent dangers,” the chief said. “But those running in, protecting against the forces that prey and hate; those that divide and destroy.”

Not long after U.S. Marines folded up the American flag that was draped over Torres’s coffin, friends and family of another shooting victim, Susan Karnatz, filled the sanctuary of North Raleigh Presbyterian Church, The News & Observer reported.

Glass panes in the church’s ceiling offered glimpses of the natural world that Karnatz loved and whose beauty led to her belief in God in her teenage years, Pastor Lisa Hebacker said during the service.

Karnatz, 49, was killed while running on the trail. An avid runner, she had completed the Boston Marathon four times. She had paused her early career as a school psychologist to home-school her three boys, The News & Observer reported.

“And now I wonder what her life might teach us, even through her death,” Hebacker said. “I am sure – sure – that the circumstances surrounding Sue’s death teach us that the world still has an awful lot to learn about love.”

A memorial is also expected in coming days for Mary Marshall, 34, a Navy veteran who was walking her dog when she was killed. She had planned to get married later this month.

Another victim was Nicole Connors, shot while talking to a neighbor on her porch. She was the matriarch of her extended family and her funeral is scheduled for Thursday in Dayton, Ohio, according to the Dayton Daily News.

A memorial was held Thursday for James Thompson, 16, the older brother of the 15-year-old who police say carried out the shootings. A basketball jersey had been placed atop James Thompson’s coffin.

He was “just getting to that age when the whole world was opening up for him,” Jeff Roberts, senior pastor of Trinity Baptist Church, said during the service.

The shooting suspect was identified by his parents as Austin Thompson. Police said they believe he fired shots at officers and that multiple officers returned fire before he was arrested. He remains in critical condition, according to a report released by police on Thursday.

The parents released a statement that they are “overcome with grief” and saw no warning signs that “Austin was capable of doing anything like this.”

His mother said Wednesday that he was moved to a pediatric ICU unit. The top local prosecutor has said she will seek to charge the youth as an adult.