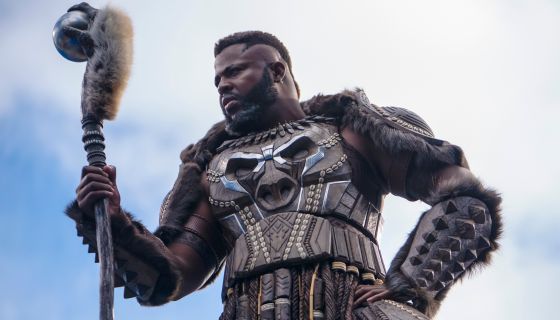 Remember when Winston Duke just posted this and we were all expected to go about our lives as if nothing had happened? pic.twitter.com/wJXmsJQQ1u

Girth gawd Winston Duke has social media in a TIZZY over his thunderous thigh meat and scene-stealing return as larger-than-life Jabari juggernaut M’Baku in global blockbuster Black Panther: Wakanda Forever where he proves, yet again, that he’s a STAR who deserves more leading roles in Hollywood.

Winston Duke can get it 🫦 pic.twitter.com/gggnrjGckK

Since his breakthrough performance in beloved blockbuster Black Panther, fans have shamelessly thirsted over the massive 6-foot-5, 250-pound actor who addressed the hilariously lusty tweets in a recent Esquire feature.

I do appreciate the respectful thirst tweets … heretofore known as thweets https://t.co/e9ksBVcRns

And based on several thirst-fueled tweets, Winston Duke delivered the girthy goods.

Would strongly advise finding a private spot to watch this video of @Winston_Duke at the @esquire photoshoot 🔥 pic.twitter.com/rvWwXSTg8I

“He did not disappear as a result of the snap, so he was there as the country had to deal with that loss,” says Duke. “He was involved in the battles of Avengers: Infinity War and Avengers: Endgame, and he is transformed. He had to go through all of it, and he was essentially one of the pillars of Wakanda during that time.”

“So, he has seen the consequences of opening the borders, the consequences of a brand-new world. He is now a full-fledged member of Wakandan society. He’s a part of the tribal council so he has a lot more responsibility and we’ll see that play out in this film.”

“I look at M’Baku as a stress test to see if things belong,” continues Duke. “M’Baku puts pressure on things to make sure that they are deserving and can withstand the changes that will come in Wakanda. He pressures everything. He pressures everyone.”

“Sometimes, it’s with humor. Sometimes, it’s antagonistic. But at the end of the day, he wants the best for Wakanda, and I think that’s a deeply honorable, powerful thing. He doesn’t mind making enemies if it means protecting his people.”

Winston Duke did a lot of training for the highly anticipated follow-up to Black Panther.

“We all had to do a lot of swimming training and a lot of free-diving training,” he says. “I got to hold my breath for up to four minutes, which is really cool. I got to jump off of a really high height and do an incredible stunt that I was really stoked about, and I’m excited for people to see.”

“The fight training was really incredible, and I always try to make M’Baku feel like a strong man instead of a body builder or a guy that’s about aesthetics,” continues Duke. “So, he’s always strong and has the silverback attitude. He has a lot of weight, culturally, on his back, and he carries it with pride, and that’s a really big part of what defines the character.”

What was your fave M’Baku moment of Wakanda Forever? Tell us down below and enjoy the reactions on the flip.