The Great Days > News > With help from GOP, same-sex marriage is one step closer to becoming law of the land
News

With help from GOP, same-sex marriage is one step closer to becoming law of the land 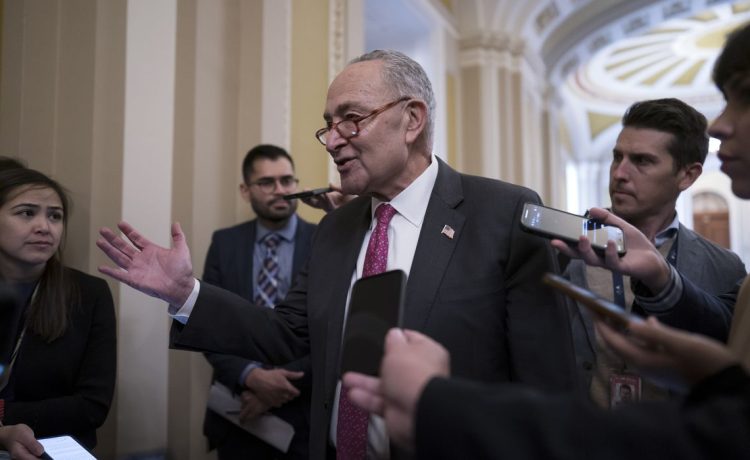 Legislation to enshrine marriage equality into federal law cleared a key procedural hurdle in the Senate on Wednesday with bipartisan support, overcoming the 60-vote hurdle needed to advance toward passage.

The Respect for Marriage Act would codify into law the Supreme Court’s ruling making same-sex marriage a right and mark a historical moment for the LGBTQ community that has long advocated it should be protected under law.

“It will make our country a better, fairer place to live. Passing this bill is as personal as it gets for many of us in this chamber. Myself included,” said Senate Majority Leader Charles E. Schumer, New York Democrat, who added that it was also personal. “My daughter and her wife, my daughter-in-law, are expecting a baby next spring, and I want to do everything possible to make sure their rights are protected under federal law.”

The bill survived the test vote 62-37. All 50 Senate Democrats voted for it and were joined by 12 Republicans. The final vote on passage has not been scheduled, but it’s expected to easily pass.

It then heads back to the House for final approval.

A version of the legislation was passed by the House with bipartisan support this summer but it stalled in the Senate amid religious liberty concerns from Republicans. After originally pushing for a pre-Election Day vote, Democrats agreed to postpone until after the election so a religious liberty carveout could be written to win over enough Republican support.

“We often think, when we think about marriage, the wedding, and the ceremony, and the celebration, but we don’t often think about the hundreds upon hundreds of the rights and responsibilities that civil marriage confers upon couples,” said Sen. Tammy Baldwin.

The marriage-rights bill was spearheaded by Ms. Balwin, a Wisconsin Democrat who in 2012 became the first openly gay person elected to the Senate.

In addition to same-sex couples, the bill offers protections for interracial marriages while providing exemptions for nonprofit religious organizations that they will not be forced to offer services or goods associated with same-sex marriages.

As public support for same-sex marriage has increased, conservative-leaning religious groups that historically opposed it have also changed their tune. This week, the Church of Jesus Christ of Latter-day Saints, popularly known as the Mormon Church, became the latest group to back the legislation.