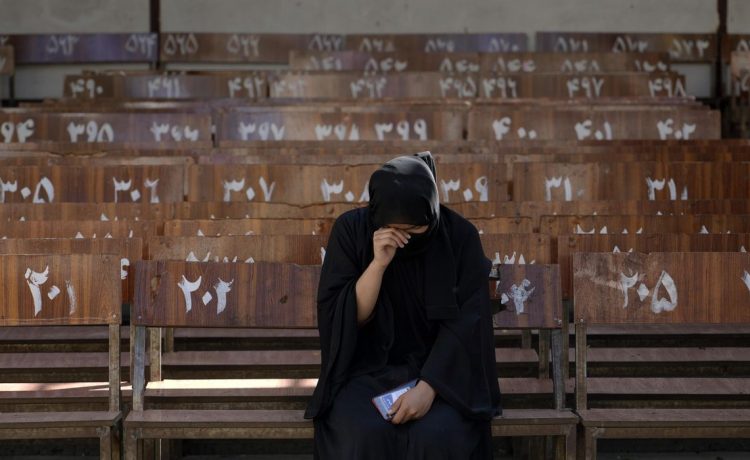 KABUL, Afghanistan (AP) — A group of Afghan women Saturday protested a suicide bombing that killed or wounded dozens of students in a Shiite education center in the capital Kabul a day earlier, demanding better security from the Taliban-run government.

The demonstration was quickly broken up by Taliban police.

The bomber struck an education center Friday packed with hundreds of students in a Shiite neighborhood, killing 19 people and wounding 27. Among the casualties were teenagers taking practice university entrance exams, a Taliban spokesman said.

The morning explosion at the center took place in Kabul’s Dashti Barchi neighborhood, an area populated mostly by ethnic Hazaras, who belong to Afghanistan’s minority Shiite community. The Islamic State group has carried out repeated, horrific attacks on schools, hospitals and mosques in Dashti Barchi and other Shiite areas in recent years.

About 20 protesters Saturday gathered in the Dashti Barchi area for about 45 minutes before their rally was broken up by Taliban security. They carried banners in English and Dari reading “Stop Hazar Genocide.”

“We are asking the Taliban government, when they claim that they have brought security, how they cannot stop an attacker from entering an educational center to target female students. In this incident, one family has lost four members, why is it still happening,” said demonstrator Fatima Mohammadi.

Staff at the Kaaj education center spent Saturday cleaning up the wreckage caused by the attack, while victims’ family members searched through items covered with blood belonging to their loved ones.

Hussain, who goes by one name, witnessed the attack. He said he believed the death toll was significantly higher, based on the large number of bodies he saw.

“First the attacker just over there, where a huge crowd of students was standing, opened fire. At least 40 people were killed there,” he said.

Zahra, a student who survived the attack, was unharmed because she went out just minutes before to buy a pen. She said she lost her friends in the attack and also her hope for a better future.

“I am not even sure if there is a future for us anymore or not,” she said.

No one has yet claimed responsibility for the attack. The Islamic State group – the chief rival of the Taliban since their takeover of Afghanistan in August 2021 – has in the past targeted the Hazara community, including in Dashti Barchi,in a brutal campaign of violence.

Militants have carried out several deadly attacks in Dashti Barchi, including a horrific 2020 attack on a maternity hospital claimed by IS that killed 24 people, including newborn babies and mothers.