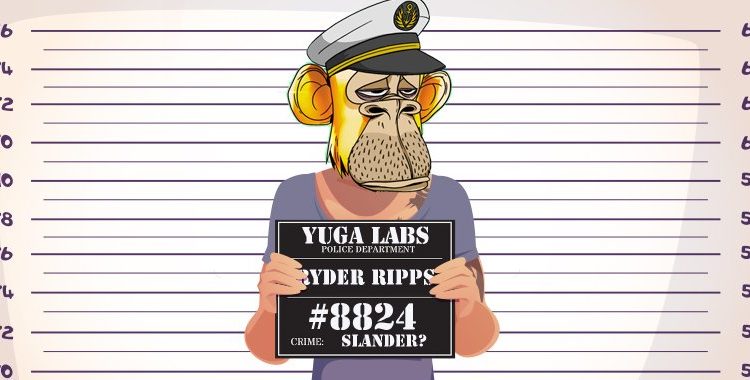 Yuga Labs, the team behind the ever-present BAYC project has announced its filing a 43-page testimony against American conceptual artist, programmer, and cyber culture connoisseur Ryder Ripps. The testimony includes a number of accusations which fall under the realms of slander, attempts to devalue to project, and the unsolicited use of BAYC IP.

The BAYC founders, who go by the pseudonyms of Gordon Goner and Gargamel, claim that Ripps has been ‘scamming’ buyers and ‘seeking to devalue’ official BAYC NFTs through launching his own equivalent NFT collection in an attempt to harm BAYC’s standing within marketplace charts. The derivative collection also uses an ‘Ape Market’ NFT marketplace in which Yuga Labs claims features official BAYC IP without having permission.

The rationale behind Ripps’ ploy to dethrone the prominent NFT collection is based on his hypothesis that the project possesses a whole host of undertones which fall under issues of racism and Nazism. Such allegations stretch far and wide, as they ask questions regarding the pseudonyms of the founders, the symbolism of the Bored Ape NFT traits, the launch date of the Otherside project, and even the BAYC logo being radically similar to the Nazi Totenkopf emblem. The work of Ripps can be found on his website which, in an effort to boost SEO, uses Gordon Goner’s name in its domain address.

As the testimony also makes references to any ‘others’ who were involved, one of the parties will most certainly be American YouTube investigator Philion, who produced an hour long video which essentially documented all of Ripps’ ideas. The video also ended with the hashtag BURNBAYC, which, as its name suggests, calls for Bored Ape owners to burn their sacred apes.

In wake of hearing such accusations, the Yuga Labs team, which is made up of a collective of Cuban, Pakistani, Turkish, and Jewish friends, produced the Californian lawsuit which states: “This is no monkey business…These actions are calculated, intentional, and wilful with the stated purpose of causing actual and monetary harm to Yuga Labs and to the holders of authentic Bored Ape Yacht Club NFTs”.

That being said, for now, Ripps’ efforts are yet to come to fruition, as over the last few days, the collection’s 24-hour sales volume has been steadily increasing.