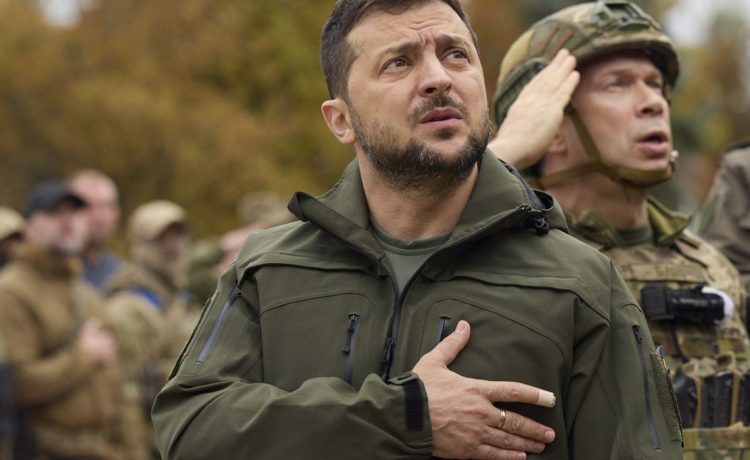 Ukrainian President Volodymyr Zelenskyy on Wednesday marked his military’s highly successful counteroffensive against Russia with a surprise visit to Izium, the front-line city which was recently recaptured by Ukrainian troops after months of Russian occupation.

Izium, like Kharkiv and other key cities in eastern Ukraine, saw Russian forces withdraw in recent days amid a highly coordinated counterattack by Ukrainian troops armed with fresh supplies of Western weapons. The rout of Russian forces has radically transformed the war over just the past week and delivered badly needed momentum to the outgunned, outmanned Ukrainian army.

But Mr. Zelenskyy’s visit to Izium, which had been a major logistical supply node for invading Russian troops, was bittersweet. The city, he said, has been largely destroyed by Russian attacks. He compared it to other cities such as Bucha, the village near Kyiv that was the site of alleged torture and other atrocities committed by occupying Russian soldiers in the spring

“The view is very shocking, but it is not shocking for me,” Mr. Zelenskyy told reporters in Izium. “Because we began to see the same pictures from Bucha, from the first de-occupied territories … the same destroyed buildings, killed people.”

Ukrainian prosecutors said they have found at least six bodies with evidence of torture in Kharkiv, the largest and most strategically important city retaken by Ukrainian troops so far. Ukrainian officials elsewhere have made similar claims, but they were not immediately verified by reporters on the ground.

As Ukraine presses ahead with its offensive, U.S. officials hailed the success but cautioned against proclaiming that the tide of the war has turned.

“It’s clear the Ukrainians have made significant progress. But I think it’s going to be a long haul,” President Biden said Wednesday.

Top Republicans in Congress pressed the president to seize the moment and dramatically increase the flow of American weapons to Ukraine at a pivotal moment in the fight. Mr. Zelenskyy’s government has been making frequent and impassioned pleas for more firepower from U.S. and NATO countries.

“Our Ukrainian friends may still face a long, hard struggle to achieve victory as they define it. But Western countries can help by stepping up the pace of our collective assistance,” Senate Minority Leader Mitch McConnell said in a speech on the chamber floor Wednesday.

“The Ukrainians need more of the weapons we’ve been giving them,” the Kentucky Republican said.

Pentagon officials have stressed in recent days that the pace of U.S. weapons deliveries will not slow down, though there has been little clear indication from the Biden administration that a significant increase in those deliveries is on the immediate horizon.

The British Ministry of Defense said Wednesday that it is “highly likely” Moscow has begun to deploy Iranian-made drones in Ukraine. Ukrainian officials claimed Tuesday they shot down a Shahed-136 drone during the ongoing counteroffensive campaign.

The use of those Iranian drones, British officials said, suggests Russia is running short on its own equipment.

“Russia is almost certainly increasingly sourcing weaponry from other heavily sanctioned states like Iran and North Korea as its own stocks dwindle,” British intelligence officials wrote in a Twitter post. “The loss of a Shahed-136 near the front lines suggests there is a realistic possibility that Russia is attempting to use the system to conduct tactical strikes rather than against more strategic targets farther into Ukrainian territory.”