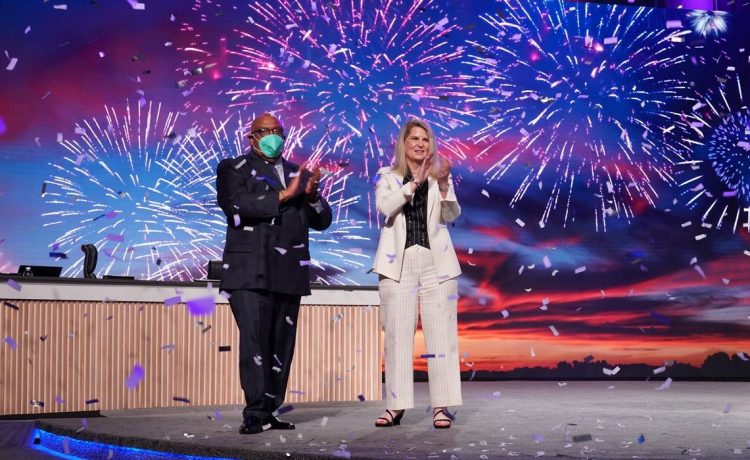 The AFL-CIO elected Liz Shuler as its president, making her the first woman to hold the labor organization’s top spot.

Ms. Shuler acknowledged that the group of 57 unions and 12.5 million members has a lot of work to reinvigorate the national labor movement.

“This is more than a comeback story,” Ms. Shuler said in a statement. “This is a new story, yet to be told.”

Delegates at AFL-CIO’s convention selected Ms. Shuler to lead in a four-year term this weekend, formally appointing her as the replacement for the late Richard Trumka, who died last year. Ms. Shuler assumed the leadership role after his death.

In her acceptance remarks, Ms. Shuler said she wished Trumka were present and recalled how he always expected he would lead the labor organization one day.

Ms. Shuler said her path to AFL-CIO leadership was much different than Trumka’s, and she portrayed her rise as emerging from outside the spotlight and the result of learning from her parents.

“Elon Musk said the problem is Americans don’t want to work — the problem is we are exploited at work,” Ms. Shuler said in her speech on Sunday. “Just look at Amazon, where workers have to leave their dignity behind because democracy is missing from the workplace.”

Mr. Musk has pursued a hiring freeze at the electric vehicle manufacturer, and he sent an email to employees directing them to return to the office for 40 hours per week or the company would assume they resigned, according to reports.

Amazon is engaged in a dispute with warehouse workers who are seeking to unionize. After Amazon workers at a Staten Island, New York, warehouse became the first group to vote in favor of unionization, Amazon raised objections that are set to be heard by the National Labor Relations Board on Monday.

Amazon’s tussle with workers may serve as a test of the labor movement’s strength as the American economy emerges from COVID-19 restrictions on physical workplaces.

Alongside Ms. Shuler, AFL-CIO delegates picked Fred Redmond for secretary-treasurer, making him the first African American to hold that office.

“We will keep fighting until every worker in this country has the chance to have a good union job,” Mr. Redmond said in a statement. “Everybody in, nobody out. And we’re going to fix our labor laws and make that a reality.”