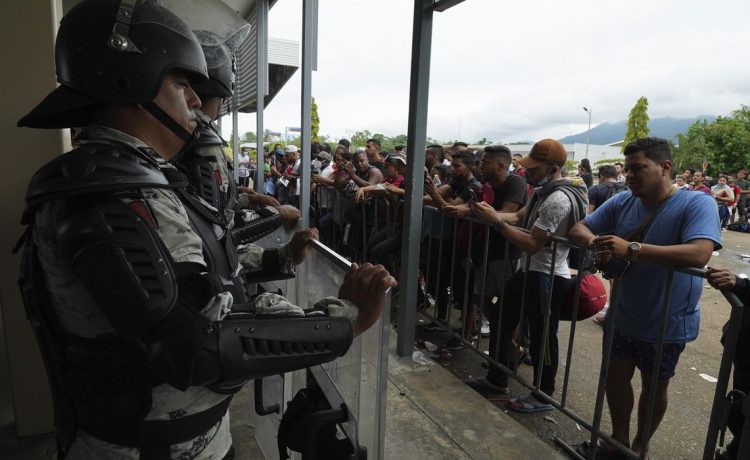 HUIXTLA, Mexico (AP) — Mexico’s migration agency has issued nearly 7,000 temporary documents and transit visas over the last few days to members of a migrant caravan which by Saturday had broken up in southern Mexico.

Hundreds of people were heading north in buses while others were spread out over various towns north of Tapachula, near the Guatemalan border, resting or waiting to receive money from relatives to continue their trip to the United States.

In its statement, the Mexican migration agency did not specify what kind of documents were issued but most of the migrants showed papers that gave them a period of one month or more to leave the country or begin regularization procedures in Mexico. Most want to use the documents to reach the U.S. border.

The migrant caravan left from Tapachula on Monday. But it had split up by Thursday, when regional leaders were meeting in Los Angeles at the Summit of the Americas to talk about migration and other issues.

President Joe Biden and other Western Hemisphere leaders announced on Friday what is being billed as a roadmap for countries to host large numbers of migrants and refugees.

Meanwhile, the bus terminal in the southern Mexican town of Huixtla was filled with migrants looking for tickets north.

Alejandro González Rincon, his cousin and six other friends from Venezuela were only able to get tickets to Tuxtla Gutierrez, the capital of Chiapas, because all the other destinations they wanted, such as Mexico City, were sold out. Their plan was to slowly make their way up to the U.S. border, he said.

Venezuelan Eddy Jimenez planned to return to Tapachula as soon as his cousins got their documents. He would wait there until his relatives send him money to resume heading north. He wanted to reach Mexico City and then Monterrey, a big city closer to the border.

Since October, Mexican authorities have dispersed other caravans by offering to move migrants to other cities where they can legalize their status more quickly. The goal was to lessen migrant pressure in the south.

Human rights groups have criticized the migration agency’s lack of transparency in carrying out these procedures. Advocates also say authorities sometimes do not respect the documents.